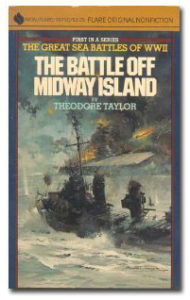 In grade school we had book fairs, where they’d set up a room in the school like a library, fill the shelves with brand new paperbacks, and let us students browse and take one book of our choosing. While at one of those fairs, in fifth or sixth grade,  three friends and I picked as our one free book the one that had the blazing ship, crashing plane, and smoke from gunfire on the cover.  While the realism of the cover of “The Battle Off Midway Island” can definitely be debated, it got our attention. That book got me obsessed about the USS Yorktown; an obsession that lives on to this day.

“The Battle Off Midway Island” is definitely what would now be called a young adult history book, or maybe even middle-grade. No high concept or language here, just story telling in a straight-forward and simple style. One thing that intrigued me as a writer is that the entire book is written in present-tense (no idea why someone would do that, but it works for the most part).

The book opens with a sample history of the Midway islands, from when the United States took possession of them in 1859, though the late 19th century (when they did a spectacular job of attracting shipwrecks), to the U.S. Navy taking over the atoll and establishing a light house in the early 20th century. They then became a seaplane base and stopover in the 1930’s, remaining virtually unchanged until the attack on Pearl Harbor. As part of that operation, the islands were shelled by two Japanese destroyers on their return from the Hawaii attack.

Though simplistic, this was the first Midway book I ever read … and it was effective at snagging me.

The main action of the book really starts in Chapter 4. Events leading up to the Coral Sea battle are interwoven with a brief description of breaking the JN-25 code and how it allowed the U.S. to have Lexington and Yorktown on the scene to counter the invasion of Australia. Also mixed in are nice descriptions of which units make up a task force. Chapter 5 is another descriptive chapter, focusing on the aircraft carrier, its uses and purpose. Italicized names are given, such as hookman and ordnanceman, listing their shirt colors and duties, again all melded with the action as the battle itself is described.

With the stage set in Coral Sea and all of the terms out of the way, the remainder of the book is about the rush to get the American Fleet to Point Luck in time to meet the Japanese, and then on to the battle itself. Again, all simple, straight-forward, and with brief chapters of only 2 or 3 pages, it really moves fast.

As with any book on Midway, Yorktown features prominently. Her damage at Coral Sea is highlighted, and then more time is spent describing her miraculous repair in Dry Dock 1 at Pearl Harbor after the battle. Two chapters of the book are devoted entirely to the two attacks directed at her during the battle, and one on her abandonment and subsequent sinking.

In all honesty, this is a book for young readers. Though simplistic, this was the first Midway book I ever read – actually one of the first if not the actual first history book I ever read – and it was effective at snagging me. I remember reading this in just a few days — much faster than my friends who had picked the same book — and once I’d finished it I was hooked on navy history and U.S.S. Yorktown. I then sought out everything else I could find on her; it’s what lead me to the other books in the review list here, and what started a fascination with Yorktown that lives in me to this day.

A bit dated, but highly recommended if you have a young reader you want to get interested in history, Midway, or Yorktown.