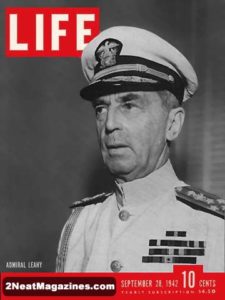 While the Battle of Midway, and Yorktown’s sinking, occurred in early June of 1942, it wasn’t until September of that year that her loss was acknowledged. Security and all that. One of the first media reports of the loss of U.S.S. Yorktown came in the September 28th, 1942 edition of “Life”. With Admiral Leahy pictured on the cover, the report on Yorktown is covered on pages 34 and 35. Five photos are included, the top most one rather large at 20″ across (“Life” was a large format magazine). Three of the photos are well known by anyone who’s studied Yorktown, the other two depict wounded being taken from the rescue ships after their return to Pearl Harbor. The original text, unedited, is as follows:

“The Navy announced last week that “the fightingest ship in the world” was no more. The U.S.S. Yorktown, participant in all but one of the Pacific’s great air-sea battles, had sunk to the bottom of the ocean. Like the Lexington before her, she rests in a hero’s grave.

At dawn on June 4 near Midway the mighty “Y” was steaming to the attack. Dive bombers, torpedo bombers and square-tipped fighters roared off her decks, returned later with news of Jap ships destroyed. At 2 in the afternoon the Japs struck back. Some 36 bombers from the carrier Hiryu swarmed over the Yorktown, dodging fighter planes and anti-aircraft fire, scoring three direct hits.A few hours later Jap torpedo planes skimmed in, a few feet off the water, opened great holes in the ship’s hull. Huge fires burned internally and she threatened to capsize.

By evening her crew had abandoned her and she lay a ghostly hulk on the horizon. Two days later when a skeleton crew had been placed aboard to make her ready for towing, she got her fatal blow. A Japanese submarine planted two more torpedoes in her heart. Like a whirling water witch she plunged to her death.”

I picked up this original copy from eBay several years ago, and a quick search shows that you can still snag one for around $10; not a bad deal considering the cover price in 1942 was $4.50. 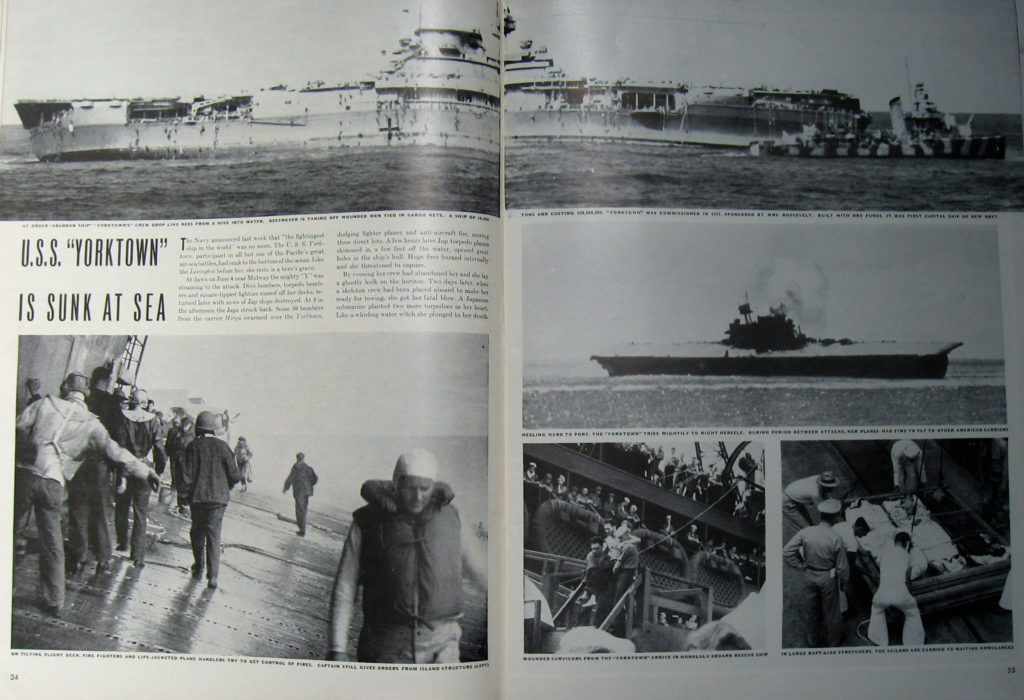