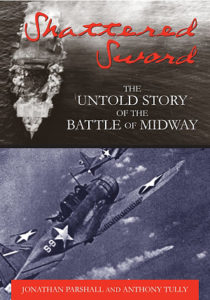 There are no shortage of books on the Battle of Midway, but very little from the Japanese point of view. Authors Anthony Tully and Jonathan Parshall, drawing on research and contacts only available in recent years out of Japan, have taken on the daunting task of showing the battle from the Japanese perspective. They succeed remarkably.

Shattered Sword deals with, of course, the obligatory narrative of the build up to, and start of the Second World War. From there it proceeds on to the events that culminated in the Battle of Midway. This has been done before in nearly every Western treatment of the battle, but with the Japanese perspective, we get more information that really brings events of June 4th, 1942, into, if not a new light, then at least a light that’s better able to flesh out the shadows of the “why”.

Shattered Sword most deftly delves into the cultural influences of the Japanese and how these aspects informed the way they fought. We get insightful sections on the culture, dogma, doctrine, and mind-set of the Japanese of that era. The biggest mistake with Western treatments of the battle has been the assumption that the Japanese fought their carriers in the same manner as the U.S. We are shown many telling examples of how this is not the case, from the daily routine of the crew and the instilled caste system, to the design of the carriers themselves, which placed less emphasis on damage control and survivability than their American counterparts.

Most texts on Midway deal a great deal with the preceding battle of The Coral Sea. Beyond the obvious points that have been covered in the past (Yorktown’s damage and the absence of two Japanese carriers that should have been at Midway), we see how that battle influenced the decisions specifically on June 4th, such as the Japanese unwilling to retire when the disaster falls, due to censure of Japanese commanders in command during the Coral Sea. We also jump to the American side for a bit to understand Fletcher’s reluctance to launch his entire force against the Japanese carriers without definite intelligence that all four had been located, as he still smarted from the mistake of launching a full task force’s might against the light carrier Shoho at Coral Sea.

These insights make this book. We see daily operational details and how they drove decisions on June 4th. For instance, there’s a section with a wonderful description of how radial engines work and why a long warm-up period on the flight deck was necessary. This could be secondary information in a lot of texts, but when the authors then go into debunking the myth of how the Japanese could have launched a devastating strike once the American carriers were spotted during the morning searches, things like a 30+ minute requirement to start and warm up a radial engine help flesh out the “why did they”? The authors then go further into the timing of a strike: how long it takes to arm, fuel and spot aircraft, how the procedure differed in that dive bombers were armed on the flight deck, while arming of torpedo planes occurred on the hangar deck. They give times as to the speed of the ordnance elevators that supplied the torpedoes and bombs, as well as the dual hangar arrangement of the carriers and how that along with aircraft elevator transit times all added up to slow a launch down if any one aspect of the components had a glitch.

Along with the required time for arming, moving, and warming up the aircraft, the authors explain the effect the morning’s failed attacks by U.S. shore based aircraft and carrier borne torpedo planes. Those continuous attacks harassed the carriers to the point that they could not maintain steady course to launch and recover for any length of time, which hampered spotting strikes, recovering the fighters on CAP, etc. This information goes a long way to dispel the Western notion that the morning attacks were mere nuisances that were easily shrugged off with no result, and they go even further into this research to provide information that Torpedo 3 from USS Yorktown were still in the throes of their torpedo runs as the carriers’ dive bombers performed their devastating attacks.

One of the biggest myths of Midway has always been that the dive bombers caught a strike group on deck of each of the carriers, and their resulting conflagration was what did in the carriers. Shattered Sword shows this to be a partial truth at best: It was a strike group under preparation that burned and did in the carriers, but they were not on deck, but in the carrier’s hangar decks. The construction of the Japanese ships resulted in totally enclosed hangars, and it was these sealed spaces, burning and filled with gas fumes and ordnance, that proved to be the time bombs that did in the Japanese force.

Coupled with the dive bomber attack descriptions, we get another eye-opener is a detailed description of how Japanese AA functioned, not only the guns, but the fire control doctrine and systems. It’s generous to state they were ineffective to the extreme: of over 140 American aircraft lost that day, only 2 can be accurately credited to AA fire. The rest fell to Japanese fighter attack. This is nicely coupled with the descriptions of the Japanese attacks on U.S.S. Yorktown and how much more effective her AA was in her defense.

Other aspects are covered in depth, such as how the Tone search plane late launch wouldn’t have changed things had it occurred on time; how, taken in cold hard numbers, the forces were closely matched that day; and how the loss of the Japanese aircrews – traditionally cited as the biggest loss suffered – were minor in comparison to the loss of the four flight decks that the Japanese simply could not replace.

In the end, Shattered Sword is a fascinating look at a story we all thought we knew. The authors have looked at it from the inside out, from the Japanese perspective, and found information that can only heighten everyone’s understanding of the Battle of Midway. While perhaps not truly revolutionary in the “how things happened” aspect, as we all know how the story ends, but from the “why things happened” perspective, it’s a true eye-opener.