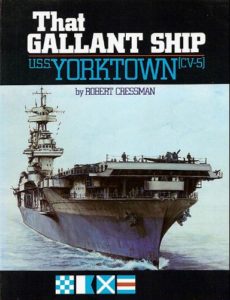 “That Gallant Ship” was first published in 1985.  Those seeking copies, though, should be aware that it has had several subsequent publishing runs, and those newer editions are listed as having more photos and updated information than the original printing.  I’ve had my copy since its first run in 1985, so I cannot comment on what additional information those later printings contain.

Cressman starts from Yorktown‘s conception, when, not happy with CV-4 Ranger before she was even finished, the U.S. Navy requested and designed a new class of carrier that was to be bigger, faster, and more heavily armored; one that could operate independently of the big gun battle fleet.  Funding was tight, what with the depression and all, but when Roosevelt came into office, Yorktown and sister Enterprise were authorized as part of his National Industrial Spending Act, to put people back to work and money back into the economy.

A sizable portion of the book deals with Yorktown‘s build, commissioning, and participation in fleet problems (war games) that worked to establish carrier doctrine. She served this time both in the Atlantic and Pacific oceans.  I found my interest waning during description of the war games, as is often the case, but Cressman held my attention by providing many photos of Yorktown and her aircraft that I haven’t seen anywhere else.  Once the Fleet Problems and Neutrality Patrols in the Atlantic are finished, the author takes us along as Yorktown transfers back to the Pacific ocean and heads off to her date with destiny.

If you’ve read any of the other Yorktown specific titles, or anything dealing with the first six months of the war, you’ve already seen the broad strokes of most of the information in this book.  What Cressman brings to the table, though, is an attention to Yorktown related information, and he really delves into the details.  Most know that Yorktown was one of the first U.S. surface ships fitted with radar, but Cressman goes into details of the radar plot and training provided to those manning it.  A section about F4F pilots McCusky and Adams and their forced landing on Guadalcanal not only deals with the loss of those aircraft, but devotes an entire page to the difficult recovery of the two pilots and the failed attempts to destroy their beached aircraft.  Likewise, later during the Coral Sea chapter, not only is Yorktown’s bomb hit related as to how it impeded the ship’s operation, but we also see thorough accounts of those who died in that blast and the others who fought the resulting fires.

Another area where this book shines in its wealth of photos. In the days before the internet, when this book was first published, this title brought to light many rare photos I’d never seen before. It still has some photos that hours of Google searches have yet to turn up.  The large format of the book allows these photos to be reproduced in large size and almost all of them are of exemplary quality.

There are a lot of great volumes about the first year of the war, and many of them deal with Yorktown’s participation.  “That Gallant Ship” is one of the most thorough of those available books.  Cressman focuses exclusively on Yorktown, and gives us information and photos that you just won’t find anywhere else.  Of the Yorktown titles out there, this is one of the best, if not the very best.