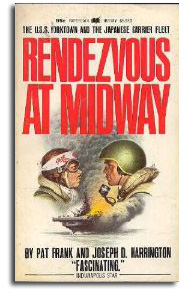 Rendezvous at Midway covers the story of U.S.S. Yorktown from December 7th, 1941, until her loss on June 7th, 1942. The attack on Pearl Harbor found Yorktown anchored in Norfolk, VA, awaiting a much needed overhaul. The start of the war change those plans, though, and she would never get the overhaul, and would essentially go into both of her major battles at Coral Sea and Midway at less than peak efficiency. This book talks of Yorktown’s transit to the Pacific in late December of 1941, and how the hurried nature of her departure caused her to leave without her own air group; Air Group 5 was temporarily assigned to U.S.S. Ranger out of port, so Yorktown embarked Ranger’s aircraft, and thus went to war with planes other than her own. Details of rushed upgrades and refits are also covered, including one where the gunnery officer simply didn’t turn over two-dozen fifty-caliber machine guns that the Navy requested, so Yorktown could go into battle with more firepower.

The book covers the usual in regards to the history of the first six months of the war in the Pacific, and a lot of what is here has been covered before. Or perhaps it is better to say it has been covered since, as this book was initially published in 1968.  At the time of publication, much was still unknown and being sorted out. One compelling element of the book is that at a time when Japanese records were still closed or not yet found, the authors have included a forward by Yahaci Tanabe, the captain of the I-168, the Japanese sub which put the final torpedoes into Yorktown.

Also due to the age of the book, there are a few inaccuracies that just were not known at the time of publication. During the Battle of The Coral Sea, combat footage showed what looked to be Japanese heavy cruiser sinking after an attack. Ens. Thomas Brown was credited with the sinking, but it was only after Japanese records were scoured that it was learned that no Japanese cruisers were lost during the battle. Likewise, much is made in the book about the “fact” that at Midway, Yorktown attacked the carrier Kaga, but it has since been proven beyond doubt that Yorktown’s target that morning was Soryu.

This was another of those formative books for me. The library in Columbus, Indiana, had this title on their shelves, and I can’t remember how many different times I checked out that red leather hard-bound copy, took notes on its contents, and even photocopied the pictures from its center gate-fold.

While you can find books with more information, and have all of that information be more up to date, I still recommend Rendezvous at Midway. It’s one of the few books that deal exclusively with Yorktown, it provides a lot of details from interviews of enlisted men and officers who were still alive at the time of the writing and more than happy to share their experiences, and it is a quick and easy read.