This set of plans is commonly referred to as the Webb series, as some of the copies have that name along with the draftsman’s name of Peter Heenan in the lower right corner. It varies on whether the names are there or not: my set has none of these markings on any of the pages, yet at a NJIPMS club meeting last night someone brought along their set of these just out of the blue, and they do have those identifiers. The easiest way to tell if you have the Webb series or not is that on Sheet 1, there’s a TBD Devastator parked on the aft flight deck.

These plans are generally regarded as the most accurate CV-5 drawings available, outside of the official drawings. These plans are actually drawn from the official builder’s drawings, with an eye towards the model builder. Hull stations and sheer lines are included, as well as some internal space locations. The drawings are rendered in 1/192nd scale, with the sheets being 64″ across on my sample.

Yorktown is depicted in her 1940 fit, after bridge modifications and other yard work was done. Lacking from these drawings is the CXAM antenna she had installed that year. Otherwise, everything is here for those wanting to model Yorktown with her big black “Y” on the superstructure.

These plans are a great resource. Beautifully drawn they’d look just as nice framed on the wall as they would spread across the workbench (as reference for back-dating the upcoming Merit kit). 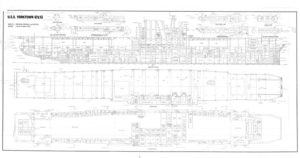 I purchased my set from Floating Drydock well over ten years ago, but they are still listed in their catalog (the drawings are overall 30 or so years old). Taubman Plans would be another good location to seek these out.