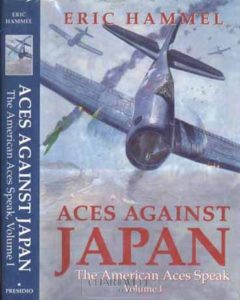 A compilation of first-person accounts, Aces Against Japan tells the story of fighter pilots that attained the status of Ace in the air war in the Pacific. Each chapter is a few pages in length, detailing a specific engagement. The author Eric Hammel sets up each piece with a little back-story, and then concludes the pilot’s remembrances with further information on what became of them later in the war and afterwards. Overall there are forty individual tales in this title, covering USN, USMC and USAAF pilots.

For the purposes of this review, I’ll focus on the one USS Yorktown-centric piece, written by Lieutenant (jg) Scott McCuskey. Titled “High Noon at Midway”, it covers specifically the noon attack on CV-5 on June 4th, 1942, during the Battle of Midway. McCuskey had been assigned to help screen the TBD Devastator torpedo plane strike on the Japanese carriers, but at the last minute he and his wingman were pulled from the mission and held for the Combat Air Patrol (CAP) over Yorktown. The story picks up in McCuskey’s words with the arrival of the flight of 18 Val dive bombers. With little time to engage, and few other aircraft in his area to assist, McCuskey attacked the formation. After his initial pass found him amidst the entire enemy formation, he relates:

“I wanted to shoot them all down at once, but I had to concentrate, momentarily, on one at a time. So, as I moved across the rear of the first division of Vals, I kept dipping my left wing sharply so I could hang briefly. This gave me a second or two of concentrated fire from my six guns.”

No one knows how many Vals he shot down, somewhere between 3 and 6, but many eyewitnesses, especially his wingman, credit him with greatly disturbing and breaking up the 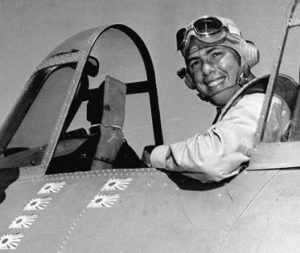 attack. Besides describing the noon dive bomber attack on Yorktown from his vantage point, McCuskey also tells of the gun problems with the new F4F-4 Wildcat fighters: the new models had more guns, but less ammunition per gun, resulting in significant less firing time. Also, the aircraft arrived on Yorktown without the guns ready to use, requiring rapid installation and calibration of the weapons that was finished only on June 3rd. The author’s afterward in the section tells of McCuskey’s stint as a flight instructor, work with prototype gee-suits, and his late-war role as a photo-reconnaissance pilot in F6F Hellcats.

Aces Against Japan is a great little collection of personal recollections of fighter pilots in their own words. The fact that it includes a chapter specifically on Scott McCuskey — someone I think has received far too little attention in the history books — makes it all the better.