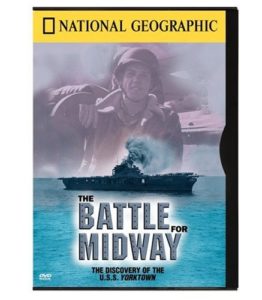 The Battle for Midway documents the 1998 expedition by National Geographic, headed by Dr. Robert Ballard, to find the aircraft carriers lost during the June 1942 Battle of Midway. The structure of this film is familiar to anyone who has seen other documentaries on shipwreck archeology: scenes of the modern-day expedition are interspersed with historical footage of WWII combat, alternating between the two, until the shipwreck is finally discovered in the last part of the film.

The Battle for Midway differs from most other films of this sort in that veterans of the battle come along for the expedition, most notably Bill Surgi, who served on board USS Yorktown during the battle. Two Japanese veterans and a member of the USS Hornet TBF torpedo plane detachment that operated from Midway are also present. There are also several interview segments with Lloyd Childers, a crewman with torpedo squadron VT-3.

Key moments in the documentary are when Ballard and crew fail to find the Japanese carrier Kaga. The disappointment weighs heavy in an interview with Ballard when he realizes the carrier won’t be found during the trip, and even though the Japanese veterans are very gracious and say they know Ballard will “find her someday”, their disappointment is obvious and touching.

The moment when Yorktown is found still sends a tingle up my spine, and I’ve seen this video dozens of times. For a ship that’s been on the bottom of the ocean for over 50 years at the time of the filming, Yorktown is in remarkable shape. Deeper than any other shipwreck previously found — three miles down — there’s very little marine life to disturb her. Close-up shots of the flight deck, bridge, forward 20mm gun tub, and other areas show the ship much as she appeared when she sank in 1942. When veteran Bill Surgi’s sees his old battle station on the flight deck, looking much like it did the last time he saw it, his choked words say all there is to say.

The Battle for Midway has the usual problem with the historical footage: for many aspects of the telling, accurate film clips simply do not exist. There’s a lot here that is accurate, but at times substitutions are made, so that at one point a bit on USS Hornet shows an Independence class light carrier as a stand-in, and when the story gets to Yorktown’s disabling and abandonment, footage of Hornet being abandoned during the Battle of Santa Cruz, later in 1942, is used. This is something that simply can’t be gotten around without huge investments in 3D modeling, though, and it isn’t a huge distraction.

The Battle for Midway is an excellent addition to any Yorktown aficionado’s collection. Well produced and an easy watch, the footage of Old Yorky sitting on the bottom is more than enough to justify the purchase.