For much of the first part of 1942, Hughes served with aircraft carrier Yorktown (CV 5). Though she was absent during the Battle of the Coral Sea in early May, she accompanied Yorktown in the Battle of Midway a month later, stood by the disabled carrier after she had been hit and abandoned, and was present when she sank on 7 June.

The model comes in the usual study flip top box that Niko is known for. The contents are secured nicely in the box, with the hull being wrapped in bubble wrap, then taped to the side of the box to prevent movement and damage.

The model is just shy of six inches long and just shy of 1 ¼ inches wide at her widest point, which scales out just about perfectly to her actual dimensions. 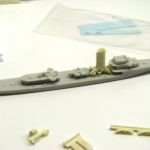 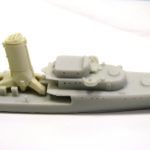 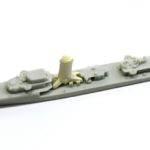 The hull is very nicely cast, with minimal flash. The forward, middle and aft superstructures are all cast onto the deck, which helps eliminate seams during assembly, but will probably make it a bit trickier to paint, especially with the complex modified Measure 12 camouflage the Hughes wore in 1942, which is the time frame depicted for the kit.

There are lots of fine details molded onto the hull along with the superstructures – capstans, lockers, K-guns and depth charges. The later will be covered in photo-etch, but might have been better served being separate pieces. The hull casting even captures the rounded edges to the forward deck pretty well.

There are about 25-30 cast resin parts in the box: the stack, gun mounts, searchlights, boats, torpedo tubes, gun directors, rafts and the top two levels of the bridge. The latter two pieces come on a thin resin wafer that needs to be sanded off, everything else comes on resin runners (or sprues, if you prefer). 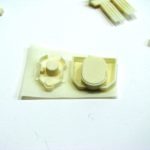 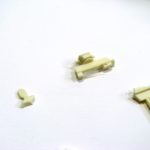 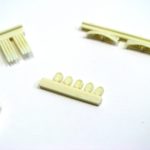 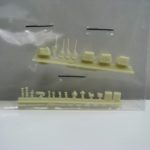 By 1942, most Sims class had four 5 inch gun mounts, with the aft super firing mount being more of a “semi-turret”, which a canvas top, to save weight. Niko has captured these pretty nicely.  The distinctive single funnel of this class is also nicely cast, as are the majority of the smaller parts, some of which have a tiny bit of resin flash that needs to be cleaned up. 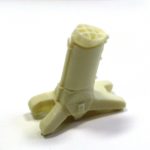 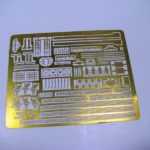 The photo-etch set is small but has a decent amount of parts on it, including the bulwarks on the main deck after the break in the forecastle, a funnel cap, braces for the bridge wings, radars, depth charge racks and railings. There is certainly enough to outfit the ship. The kit also includes brass rod for the masts.

The instructions are simple but effective and easy to follow. There is only one profile view of the port side camouflage, which, checking against pictures, is not entirely accurate. However, I have yet to find a good photo showing the entire starboard side, so some artistic license may be needed to paint that side of the ship. 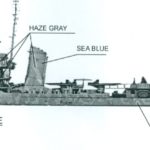 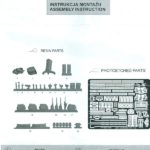 All in all, this is a very nicely done little kit, one that should build up into a nice representation of an early war Sims class kit. As Hughes worked closely with Yorktown, you can build her right out of the box to accompany your 1/700 Yorky into battle. Check your references to build any of the other early war Sims class, many had similar fits to Hughes.