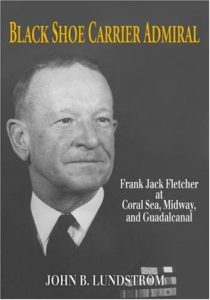 Black Shoe Carrier Admiral covers the career of Admiral Frank Jack Fletcher, a man closely tied to U.S.S. Yorktown and her career.  He moved his flag to her in early 1942 and stayed with her until her loss at Midway.  Lundstrom’s book focuses heavily on the first year of the war in the Pacific, and does so at a very high command level.  Unlike many WWII histories,  this book is much less of the day to day of maintaining and fighting a ship, and a lot more about the intelligence and decisions that brought the ships to the battles.  I have to admit that when I first started reading the book, it didn’t hold my attention too well.  I like books about specific characters, and while Fletcher is the man followed in this telling, it isn’t as close and personal as Lundstrom’s treatment of the individual fighter pilots in his First Team books.  I missed that closeness and familiarity.  There is something interesting, though, in reading about the Battle of Midway not as a blow-by-blow of the aircraft hurtling towards the Japanese carriers, but rather as an account of the radio messages coming into Yorktown‘s radio room and the attempts to decipher what it all meant. It’s amazing to see how little Fletcher and Yorktown knew of what Spruance was doing with the other American carriers at Midway, Enterprise and Hornet, even though at times during the battle they came within sight of each other.

Once I got through my initial misgivings of the book, though, I found a lot to like.  I am a fan of Fletcher’s and believe that he has been the U.S. Navy and Marine’s scapegoat for the past 70 years.  The military always has to blame someone for losses and mistakes (failed reinforcement of Wake Island, Yorktown‘s loss, Savo Island) and Fletcher was a convenient target as he was simply there.  Lundstrom points out that the reason Fletcher was there to take all the blame was because Admiral Nimitz trusted him with the aircraft carriers, even though he was a “black shoe” admiral (trained in surface warfare, not aviation).  As a result of being trusted and being thrust into a command position that few wanted, Fletcher blazed a trail for those who would follow, and established the carrier doctrine that would be used throughout the war and beyond. Lundstrom  clearly shows why Fletcher did what he did and, more importantly, offers examples of others who concurred with Fletcher’s actions at the time, as well as calling out those who changed their stories after the war, in order to paint Fletcher in a less than flattering light.

One of the more interesting takes from Fletcher’s bloody learning curve of the first six to nine months of the war comes from how he is often criticized for refueling excessively. Few of those that criticize him for that, however, bother to cite that pre-war figures for escorting destroyer’s fuel use were off by as much seventy percent (yes, that’s right. They had the numbers wrong by SEVENTY PERCENT), and the admirals and captains found themselves stuck with ships that needed to fuel every few days, at a time when there just weren’t enough oilers to go around. I’ve studied the war in the Pacific for many years and have never seen these figures cited before.

One aspect of this book that really opened my eyes, that I also I have not seen covered in detail elsewhere, is how much was still simply unknown at the start of the war.  The Battle of the Coral Sea was essentially both sides stumbling around with limited current intelligence trying to find each other, and then lashing out as hard and as fast as they could.  If the Battle of Friday the Thirteenth off Guadalcanal six months later was “A bar room brawl with all the lights turned out”, then the bulk of the action at Coral Sea can be surmised as the participants stumbling around trying to find the door before they even got into the bar.  I really got the sense, for the first time ever while reading about Coral Sea, of how haphazard an event it was. Another eye-opener was how long it took to disseminate information. It’s nearly impossible to comprehend, in an instant-information age such as now,  that it was nearly a full day after the initial clash at Midway on June 4th, 1942, before Fletcher had a clear picture of how many Japanese carriers were even involved, much less how many of them had been destroyed.

At 638 pages long, Black Shoe Carrier Admiral is a big honkin’ book.  It’s packed full of information that you won’t find anywhere else.  Presented with Lundstrom’s usual flair for research and putting the words on the page, this is a highly recommended title for those interested in U.S.S. Yorktown, Admiral Fletcher, and the formation of carrier tactics during the first year of WWII in the Pacific.