The National WWII Museum has posted a video of William “Bill” Roy and his recollections of his experiences onboard Yorktown during the Battle of Midway. 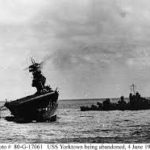 Over at Joy Neal Kidney’s website, the story of Yorktown crew member E 1/c Donald Wilson, and a copy of his naval citation and commendation medal for assisting with the attempted salvage of CV-5, has been posted. Definitely worth a read.

The U.S. Naval Institute website posted “Flying into a Beehive: Fighting Three at Midway” back in 2007, but it’s still a relevant article about USS Yorktown‘s airgroup during the Battle of Midway.

Link added to the Internet Resources page. You can also get to the article directly by clicking HERE. 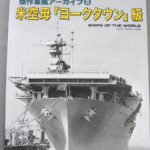 A review of the Japanese publication “Ships of the World” issue “World’s Vintage Warships Vol. 8: Yorktown Class” has been added to the website HERE.

On YouTube’s “Memoirs of WWII” channel, they’ve published a video of Yorktown crewman Roger Spooner’s account of abandoning the ship during the Battle of Midway. There are inconsistencies in his story against what is known to have happened during the battle (he mentions a Japanese plane crashing into the ship, but there’s no record of that); regardless, it’s worth a watch and very compelling.

There’s a lot of text and a lot of images in Martin J. Quinn’s review of the Merit USS Yorktown kit in 1/350th scale. So, it took a while to add it to the site. It’s up now, however, and can be access HERE.

With that, all of the static site information has been restored. We’ll start adding links to Yorktown articles and model builds online, and begin to look at reviews of recent Yorktown related items, such as books, more model kits and aftermarket for said kits, etc. 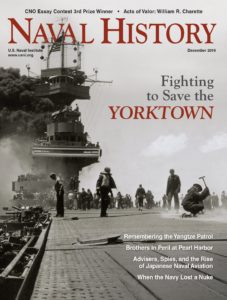 The US Naval Institute’s magazine, Naval History, has a feature article on the Yorktown at Midway, and how her experiences there and at Coral Sea helped shape the wartime Navy’s approach to damage control.

The article can be viewed in the print December issue, and is also featured online HERE.

We continue to add content from the original site to this new location. Several book reviews have been restored, including That Gallant Ship, and The Battle Off Midway Island. We also got USS Hammann survivor Wood Fugate’s story back online, which was particularly important to us, as this may be the only place that piece was ever published. 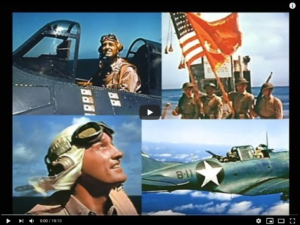 A copy of John Ford’s “The Battle of Midway”, claiming “digitally restored color” is now available to watch on YouTube. The description reads, in part:

“Highlights include memorable scenes from the Marine Base on Midway, airfield B-17s leaving to attack the Japanese fleet, patrolling PBYs,. action packed Japanese attacks on the Yorktown and Midway, and up close shots of the Yorktown’s squadron VF3 and their F4F Wild Cats, including aces John S. “Jimmy’ Thach (“The Thach Weave”) and Lt. E. Scott McCuskey. And it wouldn’t be a John Ford movie without some of the most vivid combat cinematography you have ever seen, a touching and dramatic score by nine time Oscar winner Alfred Newman, and some folksy narration by Henry Fonda.”

You can find the video by clicking HERE.

Continuing on with the website restoration, the History pages USS Yorktown CV-5 History and Other Ships Named Yorktown have been added to the site.