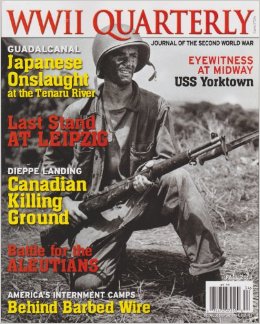 Ray Daves enlisted in the Navy in 1938. As a radio man, he found himself on shore duty at Pearl Harbor, front-row-center for December 7th, 1941. He volunteered for warship duty immediately afterwards, resulting in a single patrol on the submarine USS Dolphin (SS-169), and then transferred to USS Yorktown (CV-5) in time for Coral Sea in May of ‘42. He stayed with her until CV-5 sank at Midway in June of that same year.

“Mayhem at Midway”, in the Fall 2013 “WWII Quarterly” magazine, covers Daves’s experience onboard Yorktown, from her hasty repairs at Pearl Harbor through her sinking. The preface to the piece says that this is “Ray Daves’s story as told by Carol Edgemon Hipperson” in Hipperson’s book “Radioman”. I’m not sure if the piece is a verbatim chapter from the book, or if it’s been edited down to run in the space allotted.

The piece is told first-person, by Daves himself, and gives a “what it was like to be there” insight to events that many Yorktown historians already know from other points of view. The crash that killed Fighting Three’s XO LCDR Donald A. Lovelace, as the CV-5 air groups landed on May 30th, told from Daves’s vantage point on the island, gives a much more gruesome relation of the incident than the typical “plane jumped the barrier and crashed into the one ahead of it”. His recounting of the lull between the two aerial attacks on Yorktown at Midway is also candid and sobering, relating how the chaplain and volunteers rushed to bury the dead at sea to clear the decks for more action, the men slipping in the blood and gore. Further recollections deal with the shipboard fires, patching the flight deck after the initial bomb strike, the uncertainty of how long Yorktown would stay afloat once she started rapidly listing after the torpedo strike, and the grim reality of abandoning the ship.

Ray Daves’s personal stories of an enlisted man’s experience onboard CV-5 at Midway is well worth checking out. All too often histories forget the common sailors’ perspective, but this article, and I’d assume the book “Radioman” as well, do a wonderful job of giving us a different point of view on the story of USS Yorktown.

WWII Quarterly Magazine can be found at most well-stocked newsstands. I found my copy at the local Barnes and Noble magazine rack. The magazine does not appear to have a dedicated website, that I could find.